With an exceptional historical background and rich cultural heritage to boast about, Nanded is a city which is centrally located in the Marathwada region of Maharashtra. Of late, it has begun to attract a number of tourists from across the world as it has numerous places of interest that are spots of religious importance and natural beauty. The city is well known for the popular Sikh Shrine, the Sachkhand Gurudwara or the Hazur Sahib that was built after the death of the last guru of Sikhism, Guru Gobind Singh. As the city was under the rule of the Moghuls in the ancient times, it has gained a huge reputation as a holy city with the number of places of worship found here. 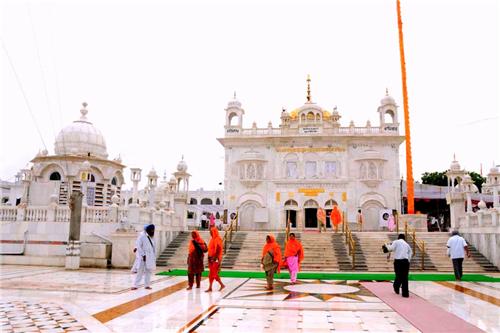 This is mainly because Nanded has many Sikh shrines, temples and mosques that offer it a vibrant hue and positive energy. This has attracted many tourists and pilgrims to this holy city who visit the region all round the year. Popular religious spots like Khandhar Dargah, Masjid of Biholi, Unkeshwar temple and spots like Vishnupuri dam offer a refreshing feel. Most tourists visit Nanded during the Navaratri season as the city wears an exuberant festive look to celebrate this Hindu festival.

With a unique character of its own, Nandi Tat or Nanded has a fair share of mythological, social and historical background to do the talking. The bustling city of Nanded located on the banks of Godavari River has some of the interesting places to visit which are a blend of places of worship, forts, waterfalls etc.

Takhat Sachkhand Shri Hazur Abchalnagar Sahib is a popular Sikh Shrine situated on the western side of Godavari River. The Gurudwara is one among the five high seats within the Sikh authority and is well known for being the place of congregation and the court of the last Sikh guru. Kandhar Dargah is a renowned place of worship for the Muslima ahs was bulit by Sayyad Saidodin in 736 Hijri ( about 750 years ago). The Kandhar Dargah is located at the south east part of the city and it holds a urus for 3 days which begin soon after 16 Rajjab. Another famous one is the Masjid of Biloli.

Another very famous tourist destination is the Renuka Devi temple, which is a popular place of pilgrimage. It is the Shaktipith of Maharshtra region and is situated on a hill surrounding the village of Mahur. The Unkeshwar Temple is a fine example of the multicultural experience and is located Northern side of the Kinwat region in the district of Nanded. Apart from these two, Lord Siddheshwar temple in Hottal and Parli Vanjinath are other two famous religious destinations.

One might think that Nanded's tourism is basiclly centered around these religious spots but there are some natural wonders you can have fun at. The Isapur Dam and Vishnupuri Dam are the major ones; the former is a earth fill dam constructed over the Penganga River at a height of 57 meters which makes it the biggest water reservoir in Maharashtra region and the latter is known as one among the biggest lift irrigation project in the whole of Asia. The Sahastra Kund and Kandhar are a splendid waterfalls found on the popular River Penganga. People looking for local cultural flavours can visit to fair in nearby Malegaon.

The winter season is the best time to visit Nanded. The city faces hot dry summers owing to its inland climate, making the chilly winters the best time for sightseeing in the region.

Best Places to Stay in Nanded

There are several options of accommodations available in this city ranging from budget hotels to guest houses. Nanded has some of the best hotels such as Hotel Anuradha Palace, Hotel Classic Amrut Executive, Hotel Bajaj Residency, Hotel Chandralok etc. which are located at convenient locations and offer rooms with decent facilities. Most of the religious places themselves are euipped with excellent accommodation options, that going for a hotel room will not make a good choice. The Gurudwara has over 2000 rooms, family rooms with attached bathrooms plus dormitories to offer accommodations to the devotees visiting the city.

Individuals and families prefer to use the accommodations offered by pilgrimage centers as it is economical and secure. There are NRI Yatri Nivas, a 10 storyed building built across a sprawling area of 1100 sq. feet, which belongs to Gurudwara Langar Sahib. This is equipped with all advanced facilities such as internet connectivity, laundry, canteen, fully furnished rooms and bathrooms with plush interiors. One would feel that the stay at this NRI Yatri Nivas is much better than their stay in the mid range hotels found in the city.