The Yellow Rice of Nanded in Maharashtra

Nanded is among the largest cities in the state of Maharashtra which is home to India’s financial capital.  Maharashtra and Marathi people are quite popular for their culture, zeal, religious beliefs and of course cuisine. Their cuisine has been inspired by the Awadhi rulers, Mughals, their proximity to the sea and the hill as well as the neighboring states including Karnataka and Andhra Pradesh.

But Nanded is popular for its interesting and inspiring legacy left behind by the Sikhs and Sufi Saints. It is home to some of the most popular Sufi Saint shrines alongside Gurudwaras. It has been even nicknamed as the ‘City of Poets’ or the ‘City of Gurudwaras’.

But today I am going to disclose the secrets of a recipe that has been inspired by one of the very first rulers of the town of Nanded- the rulers of Awadh. They have had their own share of contributions when it came to the cuisine of Nanded, which was a significant part of their dynasty.

The dish which we are going to prepare and then devour is known as Tehri. This is form of delicious yellow rice belonging to the Awadhi cuisine. A few interesting spices are added to cooked rice which provides the spicy taste and yellow colour to it. This is a very simple dish and does not take too long to be prepared. It requires ingredients and spices which are readily available in the market. 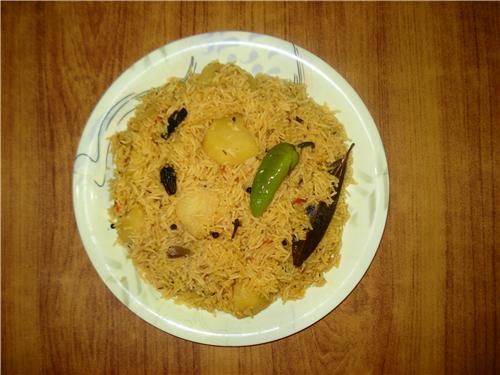 Clean the rice with water and spread it on a piece of cloth to dry. Do not let the rice soak as it will puff up the rice and make the preparation sticky. After this wash 2 potatoes and cut them into medium size cubes. Then heat 2 tablespoons of the ghee in a large wok and sauté the sliced onion until it turns crisp and dark brown. Keep it aside as it is to be used for garnishing for garnish.

Put the Garlic cloves, ginger pieces, onion and turmeric powder in a mixer and grind them into a smooth paste. Keep it aside for later use.

Follow this by adding the potato pieces in the remaining Ghee in the wok and fry it properly so that it softens and turns golden brown and strain it out from the wok or pressure cooker.

Then add the remaining Ghee to the same wok and pour in the cumin seeds and let it splatter for a while. After this add the grinded spicy paste, green chillies and coriander powder. Sauté these in the Ghee until it starts draining out of the Masala. Finally add the Basmati Rice, Garam masala and stir it properly while frying the rice.

Pour in the potatoes along with 2 and a half cups of water and of course salt. Let the mixture cook properly until the rice is done. This is why a rice cooker or pressure cooker may come in handy. If you prefer, you can also prepare the rice separately and then add to the mixture and let it simmer with very little water.

Garnish the rice with the fried onions and serve it hot with any non-vegetarian or vegetarian gravy item. You can even add Kesar to the rice so as to deepen the Yellow color of the rice. This particular dish is not only popular in Nanded and the rest of Maharashtra but is also loved across the north Indian region as well as our neighboring country-Pakistan.

Explore more about Cuisine of Nanded