Localities and Areas in Nanded 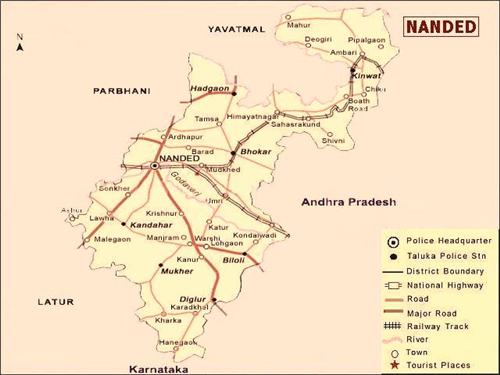 With a jurisdiction of exactly 51.76 kms, Nanded city remains to be the head quarters of the Nanded district located at the Marathwada region inside the state of Maharashtra. This city is the second biggest urban centre in the whole of Marathwada, grabbing a place behind Aurangabad. The city is located at a Northern latitude of 18 30’ and East longitude of 77 10’ with an altitude of 489 meters. The city is 300 kms away from Nagpur and 260 kms away from Aurangabad. The district of Nanded shares its border with Yavatmal district, Parbhani district, Osmanabad district, Latur district, Bidar district, Nizamabad district and Adilabad district. Nanded district comprises of 16 talukas which is divided as four divisions.

Main Areas or Localities in Nanded

Nanded, in spite of being a place of religious importance, has grown massively in terms of infrastructural facilities and has evolved as the promising commercial centre in Maharashtra. This improvement in the city occurred during the year 2008 as the 300th year celebration at the Takhat Sachkhand Shri Hazur Abchalnagar Sahib was a major event for the Sikh devotees.

The government of Maharashtra took extreme steps to develop excellent connectivity, utilities, services and infrastructural facilities in Nanded in order to help the millions of tourists who visited the city to take part in the celebration. Apart from these features, the city is a well known center of Sanskrit learning in the country and is also known for its educational institutes and universities that impart excellent education.