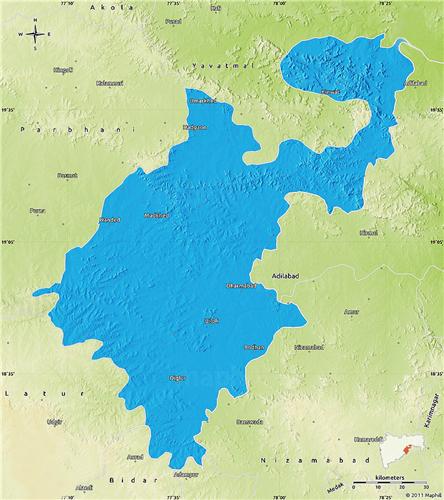 This makes the area flaunt an undulating topography that features hills, gentle slopes, valleys and plateaus. This Nanded district is divided in two main parts physiographically; one is the hilly areas located at the North and North east region of the Godavari valley while the rest is the low lying areas in the south of the valley that spreads across the banks of various rivers such as Godawari, Penganga, Manjira and Manyad. There are 16 talukas in Nanded district such as:

The Geography of Nanded shows an impressive variation in its land use, soils and terrains across the region. The area on the Godavari valley’s South is divided in to three major sub regions such as eastern, western and central regions.

In the west region of Godavari valley, the hill slopes have scarce vegetation which is very low when compared with other regions in the district. The soil is black in major areas filled with stones. The presence of black soil in this region helps in the cultivation of crops such as kharif, jowar, ambadi, tur and cotton and the region has maximum irrigation through wells that paves way for intensive sugarcane cultivation. As there is abundant amount of underwater in this district irrigation by using wells are popular. The Northern part of Godavari has lush green vegetation across the hilly slopes. The soil found here are lateritic in nature and this helps the crops such as bajra, til, cotton, jowar and til to grow well.

The central sub region of Godavari Valley across the east of Mukhed, West of Biloli and West of Deglur has rich fertile soils with good depth that encourages the cultivation of an array of crops such as rabi, kharif, wheat, linseed, jowar, til, cotton, niger seed, tur, groundnut and ambadi in this area.

This region of Godavari Valley has rich black soil which makes it an important sub region of the entire district. Even though there are no practices of irrigation practiced here with water from the river, the presence of fertile soils on both sides of the river banks makes it useful in the cultivation of rice, chillies, plantain, jowar and cotton. The area of about 41,000 acres of Nanded Taluka is irrigated using the Siddheshwar dam’s left bank canal based on the Parbhani district’s Puma project. There are also intensive vegetable cultivation performed in and around the regions of Nanded town.

The Northern part of the Godavari Valley is broadly classified as two sub regions such as the western area in Hadgaon Taluka and eastern one in Bhokar and Kinwat Talukas.

This Hadgaon taluka has Penganga river bank that is rich with fertile black soil. Even though the Taluka is known as major wheat producer, sugarcane, cotton, jowar and plantains cultivation are also found here. When looking at this taluka as a whole, there is good production of cotton and jowar when it gets moderate rains and when there is too much rain, these crops get damaged, but are compensated through the yield by wheat.

The Kinwat and Bhokar taluks in the eastern area is filled with hills and the soils are not rich in fertility and depth when compared to the west. The crops that are cultivated in this area are jowar, sugarcane, plantains, tur and cotton.

Forests and rivers in Nanded

The slopes of the eastern region are covered with huge forests as 8.3% of its total area is covered by forests. The forests in this region has deciduous trees such as teak, mayona, salai, ain and dhavada. This quality of wood which is growing in this area is better than the rest of the area which is why the furniture making industry that deals with pre-cut timber flourishes at Nanded. The produces of the forests of Nanded are khenir wood, timber, bamboo, firewood, tendu leaves, grass, gum etc. The Kinwat taluka forests follow a felling system with a 40 years cycle based on coppice with reserve system. The major rivers of Nanded district are River Godavari, Manjra River, Penganga River and Manar River.

October second week to November first half, post monsoon season follows. The cold season occurs in the month of December and the temperature experienced by the city during this coldest month is 13 degree Celsius. May is known as the hottest month as the temperature can let the mercury soar at 46 degree Celsius. The district of Nanded enjoys an average rainfall of 897.8 mm and about 88% of the total rainfall is experienced during the south west monsoon season of Nanded.