Culture of a city offers it a great identity than its topography. Maharashtra is rich in cultural heritage and its cities feature a blend of diversity and rich culture.

This city is the birth place of many renowned saintly poets such as Vishnupant Sesa, Raguhunath Sesa, Vaman Pandit and more, apart from being the center of Sanskrit education. Nanded is also the home of many cultural figures of Marathi such as the popular Marathi poet, Mr. W R Kant and a literary figure of reputation, Mr. Narhar Ambadas Kurundkar. Late Mr. Tryambak Vasekar was also a renowned celebrity in the field of Paintings who had Nanded as his home town. Nanded has also served as the venue of various literary meets and artistic conferences like the Marathi Sahitya Sammelan and Marathi Natya Sammelan.

Religions and Languages Spoken in Nanded

In spite of being a mid sized city in Maharashtra, Nanded enjoys diversity than the other cities in the state. Most of the people residing here speak the language Marathi. About 38% of the people are Muslim and they speak the Deccan version of the Urdu language. Another 5% to 10% are Sikhs who speak Punjabi or Hindi. There are also substantial amounts of population who speak Telugu. In addition, there are people who speak Gujrati (Bohra Muslim and Hindu) are Sindhi, Tamil, Christian minorities of South India and Punjabi living here. Owing to this microcosm, Nanded people speak a unique version of Marathi or Hyderabadi influenced Urdu version on the streets apart from Marathi, its main language.

Nanded enjoys a cosmopolitan culture as five main communities such as Hindus, Sikhs, Jain, Muslims and Buddhists residing here for many years. About 38% of the Nanded populations are Muslim and another 5% to 10% are Sikhs. In short, this city reflects the real Indian culture of people following various religions living together in harmony in spite of the fact that they are different in terms of community, state, language and culture. People of all religions get together on the occasion of Gurta Gaddi and celebrate the event with great pomp and show.

Nanded city is deeply rooted to its heritage and culture and each and every aspect pertaining to it depicts it. When talking about the popular dances in the region, one will find that these forms are actually an interesting fusion of music, dance and drama. Usually the songs of these dance forms are related to spiritual stories, historical fables, real life incidents of its popular rulers or important chapters of epics. Nanded region is popular for its local dance forms such as the Povadas, Bharuds, Lavni and Gondhals.

Of these dances, Lavni is a perfect blend of traditional dance with song that is performed with the help of an instrument called Dholak, which looks similar to drum. This dance is performed with great rhythm with appropriate steps to suit the temp of the song and the music produced by the Dholak and is a signature dance of Maharashtra.

Povadas is yet another dance form of the Marathi which is actually a ballad that describes the number of events that occurred in the life of Chhatrapati Shivaji Maharaj, the great king of Maharashtra. These Povadas reminds the onlooker about the life of the great hero king who was responsible for the development of Maharashtra.

Bharud is one among the Maharashtrian folk arts that is a prominent feature among the festivals and fairs held in Nanded region. This art form is an enjoyable and educative in nature as it advocates spirituality through music, drama and elocution. The Saint Eknath created this dance form. The dance arrangement of Bharud has the lead artist, Veenekari in the middle, the mridang player and harmonium player on two sides and 15 to 20 taalkari or extra dancers performing around them. This art form is interlinked with the songs depicting the folk culture. This art form is a mixture of spirituality and comedy portrayed through dance steps and folk songs. 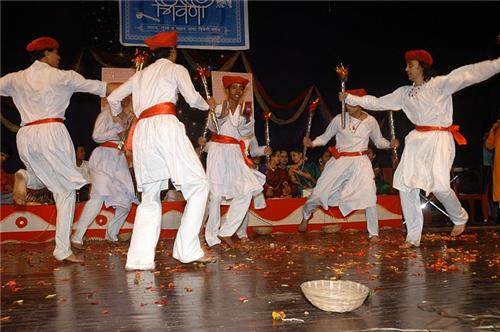 Gondhal is a dramatic art form that features the narration of folk legends, mythical stories or narrating the heroism of ancient heroes. This form of art is usually performed soon after conducting a ritual like a marriage ceremony or if there is a new born in a family or during the festivals held for the departed souls.

This art form derives its name, Gondhal as only the Gondhali community who are people who worship the Goddess Renuka Devi of Mahur or Goddess Bhavani of Tuljapur performs the dance. The dance form is either a devotional one or a dramatic presentation from the puranas. This dance is performed by 3 to 6 members team with a chief Gondhali along with various musical instruments like cymbals, conch, stringed tuntuni, sambaland chaundkedrums and tal.

Tamasha and Dindi are two popular forms of folk theater in Nanded that features an impressive blend of music, dance and drama of various influences of community in Nanded region.

Tamasha is a popular form of folk theater in Nanded, Maharashtra that is followed by Mahar and Kothari communities and features a blend of influences within it. This form of theater art was introduced during the 16th century that had Lavanis or love songs in it, which made the people to love this art form dearly. This art form uses an array of musical instruments like the Dholki, Tuntuni, manjira symbals, daf, lejim, Kade, Halgi, Ghungroos and harmonium.

This art form is a interrelated form of poetry and narrative writing that would tell its onlookers about the different forms of dance and misc that prevailed earlier with the help of the themes derived from the two Indian epics, Mahabharata and Ramayana. This explains why this Marathi art form has a heavy dose of Sanskrit influence in it. There are also two other types of Tamasha such as Pawada, which is traditional ballad singing, Dasavatara, which is a theatrical art form depicting the 10 incarnations of Lord Vishnu and Galavana, the ones that depict the Marathi literature of Vaishnavites saint poets. 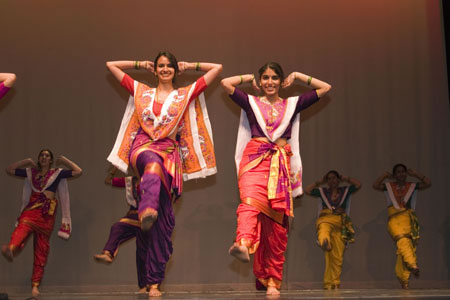 The Dindi is a fold dance which is performed usually during the day of Ekadashi that occurs in the month of Karthik. This is basically a religious dance form that has devotional songs associated with it. This devotional often is about the playful acts of Lord Krishna as a child. This art form is liked by both kids and adults as a whole as it is about the cheerful and playful attitude of Krishna god.

Kala is yet another form of folk dance about Lord Krishna that would be enacted by popular dancers during various occasions in all auditoriums in Nanded during the festive season.

The people living in Nanded are highly interested in singing and hearing all kinds of music which is well evident through the number of events and festivals that are celebrated in the city. As this is religious city, people are more in to folk music and devotional songs while some are in to other forms of music too. There are a number of music classes available in the city to learn various kinds of music at reasonable rates.

Arts and Crafts in Nanded

The city of Nanded has many artisans who rely on their skills to make a living out of it. As the Maharashtrian city is a popular religious place, people visiting it from other parts of the country often prefer to pick up few folk crafts and handicrafts as gifts for their loved ones. The local artisans living in Nanded specialize in creating a number of handicrafts which are often sold as handicrafts. Another notable folk handicrafts are the ones made from silk materials and cotton such as Himroo and Mashru. 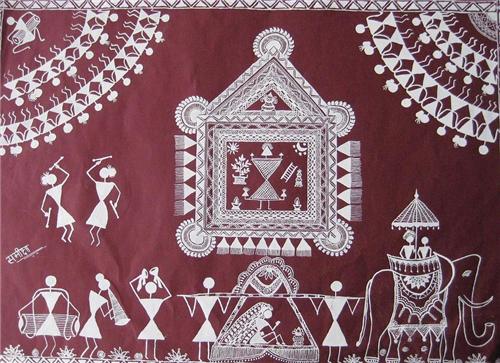 Nanded is popular for its Warli paintings that are abundant in the Deccan region. The roots of these paintings can be traced back to 10th century AD. Mostly women are engaged in creating these paintings. The Warli paintings are highly popular across the world as they do not depict any mythological gods but portray real life of a society. Images of man along with his peers and animals, which might be pet or wild, are portrayed through such paintings.

Activities of people involved in hunting, harvesting, sowing or dancing are drawn on a mud base with just a single color, white. The pattern also features an occasional shade of red dots or yellow dots to compliments the drawings in white. The significance of these paintings is that it does not use any paints sold in shops as rice is ground in to a fine powder and then used.  The drawings have a loose pattern in rhythmic style and most of them have Palghat or the god of marriage who rides a horse and is found near the bride and the groom. This is why the paintings is used in marriages as it is considered to have religious significance and is believed to have power to kindle the power of the Almighty. One can find these paintings in the form of murals, cloth or paper for business purposes and some even have modern ideas inhibited in it. 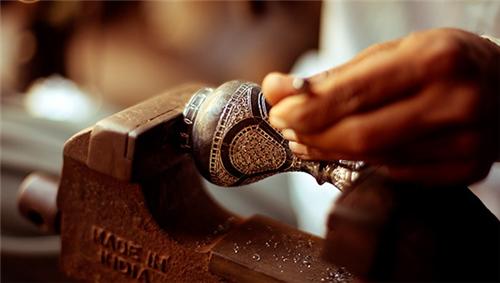 Bidriware or Bidri craft of Nanded

Nanded is also popular for the unique Bidri craft or bidriware that has existed in the district for ages. Patrons who prevailed during the Mughal rulers practiced this art. This craft was used in the ancient times to embellish the swords and weapons used by the royal people. This craft then spread on to be used on a number of items like cigar boxes, cigars, plates, studded bangles, hukka bases, jewellery, vases, glass, trinket box, ash trays, bowls etc.

Festivals and Fairs in Nanded

Nanded is a holy city as it has the popular place of worship of the Sikhs, the Gurudwara and also has a fair share of temples and mosques. The city wears a festive look all round the year as many festivals and events are held in Nanded almost every month in a year. Festivals like deep Mahotsav, Ganesh Utsav, Raksha Bandhan, Diwali, Holi, Baisakhi, Basant Panchami and Bakrid are celebrated with great joy in a pompous way. A notable festival, which is celebrated in a great manner in this city of Maharashtra, is the Gurta Gaddi. Over 40 million people gather at the Shri Huzur Abchalnagar Sachkhand Gurudwara in the city during the months of October and November to take part in the Gurta Gaddi celebrations. This event occurs once in 100 years and is a festival of great importance among the Sikhs.

Malegaon Yatra is a popular fair held at the Malegaon village which is located at just 57 kms away from the city. This is a huge animal fair that attracts many tourists from across the world who come to witness an array of animals available for sale here. This grand fair is held every year to honor God Khandoba. Apart from the fair at Malegaon, a huge fair is held to honor Goddess Renuka Devi during Dasara season. This fair is held at the Renuka Devi temple which is found on a hillock. Many devotees and tourists visit the city to take part in the big fair and to seek the blessing of Goddess Renuka Devi.